I’ll never forget it. It was 2012, and I was in London with my high school class. We had just graduated and were on our highly anticipated class trip. We walked along the pavement in somewhat single file, with small groups trying to walk together and chat.

I was walking with my two closest guy friends at the time.

We will call them “Andrew” and “Tyler”.

Distracted by all around me, I tried to take a picture and keep up with them. As I stopped to get the shot, I realized I had fallen behind so I quickened my pace and caught up to them right as they burst into laughter.

Walking behind them I asked what I had missed out on and what was so funny. Tyler turned to me and, still laughing said, “Oh Andrew just said how funny it would be to see you naked!” He turned away and caught up with Andrew.

My first reaction was a combination of nervous laughter and thinking, “I’m sorry what?” You know in movies and on TV when something insane happens to a character, or they’re about to faint, the camera closes in on them and shows the rest of the world getting blurry in the frame? But it also gives the effect that the world has stopped…and yet everything is still spinning at the same time? That’s exactly how I felt…but add the feelings of standing in Times Square naked, with being punched in the gut — that’s how I felt.

Now we’re in 2020, 8 years since that happened. It’s a moment I’ll never forget for as long as I live. Have I dissected it for years? Yes. Do I even know the full context of what was said before that lead to that comment being said? No. Does that matter now? No.

I have a close friend who was there when it happened and he has told me that while it still stings, it’s better to forgive and move on. I agree with him…however I think as a woman it’s a moment in my life that’s very hard to forget. Yes I’ve had other mean things said to me about my body, coaches always called me the “bigger girl” on the team, I’ve been called fat etc. — but what hurt the most is that it was said by my best friends.

Some people might hear that comment, or picture themselves in the same situation and think “ugh just brush it off! Boys say stupid things”. You’re right, boys do say stupid things. But as an 18 year old girl who was always referred to as the “big girl”, and who constantly wondered if bulimia or anorexia would be the trick to make her “skinny enough” to attract the attention of those idiot boys — that moment in the street was transformative.

For years later those words echoed in my head when I thought I gained some weight, my clothes fit a little tight, or I thought I had eaten too much. I had always struggled with my body image and weight before, but after that comment it was like someone took a dial labeled “Hannah’s body issues” and turned it up. I would look in the mirror at myself and my brain would say “you better get skinny or no man will ever want you or your body” or “lose more weight because you don’t want your husband to see you naked on your wedding night and laugh.”

But then, about a year ago, I got fed up. Finally fed up with the absolute bulls*** that is that comment, and all the other comments made about MY body. I got fed up with the fact that people think they can say things to me about my body, the way I let those comments dictate my emotions, and the way we as a society make women feel everyday for not having their “best or perfect body.” The pressures our society puts on women and their bodies?! It is utter bulls***!

What I’ve learned from years of comments like that, is that all you can do is learn from them. Learn from them but don’t listen to them. Take those comments for what they are: stupid, rude, and absolute lies. Don’t listen to degrading comments about you or your body and digest them as truth. For years I digested that comment made in London as TRUTH. I believed that I had to alter myself and my body more and more until I felt that no man would ever find my naked body laughable. I thought that if I just ate less, worked out more, and slowly shrank into a smaller version of myself, that that would bring me love. I was trying to make myself invisible. What I didn’t realize then, but I know now, is that trying to shrink yourself into a smaller version of yourself will never attract the love you deserve. People who don’t think that you are perfect just the way you are, they don’t deserve to be in your life. You should never ever have to alter yourself to gain the affection of another.

You also never have to alter yourself to gain the love of yourself. I never thought it would be at my heaviest weight that I would finally love myself. Funny isn’t it? There have been a few times in my life where I felt deep sadness and confusion, and when I look back at those times I realize I was at my lowest weight. I had reached what I thought would get me the love I so desperately wanted…and it didn’t. I just felt more confused and lost. All that fed me in that time were the compliments I received from others saying I “looked great”. It was a vicious cycle. I was hungry for more compliments, that I subconsciously perceived as love, so I tried to lose more and more weight; anxiously waiting for the day when I would finally be content with the number on the scale.

Now in 2020, I’m 26 years old, at my heaviest weight, and by the grace of God I have realized that the number on the scale is just a number. I’m healthy and I don’t need to alter my body at all. I love myself!! For most of my life I didn’t know women could say that. I thought that women were always and forever discontent with how they looked and because I’m a woman, that was my destiny. But it’s not!!! You are allowed to look at your body and love it JUST THE WAY IT IS!! I have thick thighs that chafe, scars on my inner thighs, rolls on my tummy, cellulite on my booty, and guess what? My heart still beats, my brain works, my legs can run and jump, and all the those marks on my body I once hated are now just reminders of how far I have come in life. All the obstacles I have overcome. Loving my body when it was smaller, and loving it now as bigger! Giving my body love, kindness, and grace is the hardest thing I have EVER had to do. I thought that wouldn’t be possible until I had Michelle Obama arms and a 6 pack — but it is, praise Jesus! To finally love the body Jesus gave me — it is the biggest weight lifted and the greatest gift.

You may be wondering if I ever forgave those boys or if they apologized? At times it felt impossible to forgive my “best friends” for saying what they said. Have I done it? Yes I have. And they have never apologized or even owned up to the moment — it’s ok though because I never expected them to.

Now whenever I think of that moment, walking down the street feeling like I just been punched in the gut, I think of the best comebacks. Comebacks like, “you’ll never be lucky enough to see my naked”, or “funny? What’s funny about a hot body?” Basically any comeback that leaves me the perfect opportunity to strut off and flip my hair in a perfect elite manner.

And those boys would be damn lucky to see me naked. But they never will because they don’t deserve that honor.

Can We Cancel Ghosting?
Previous:
An ode to 25
Next:
Living with Body Dysmorphia 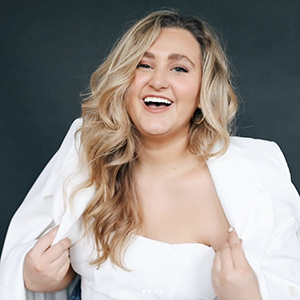